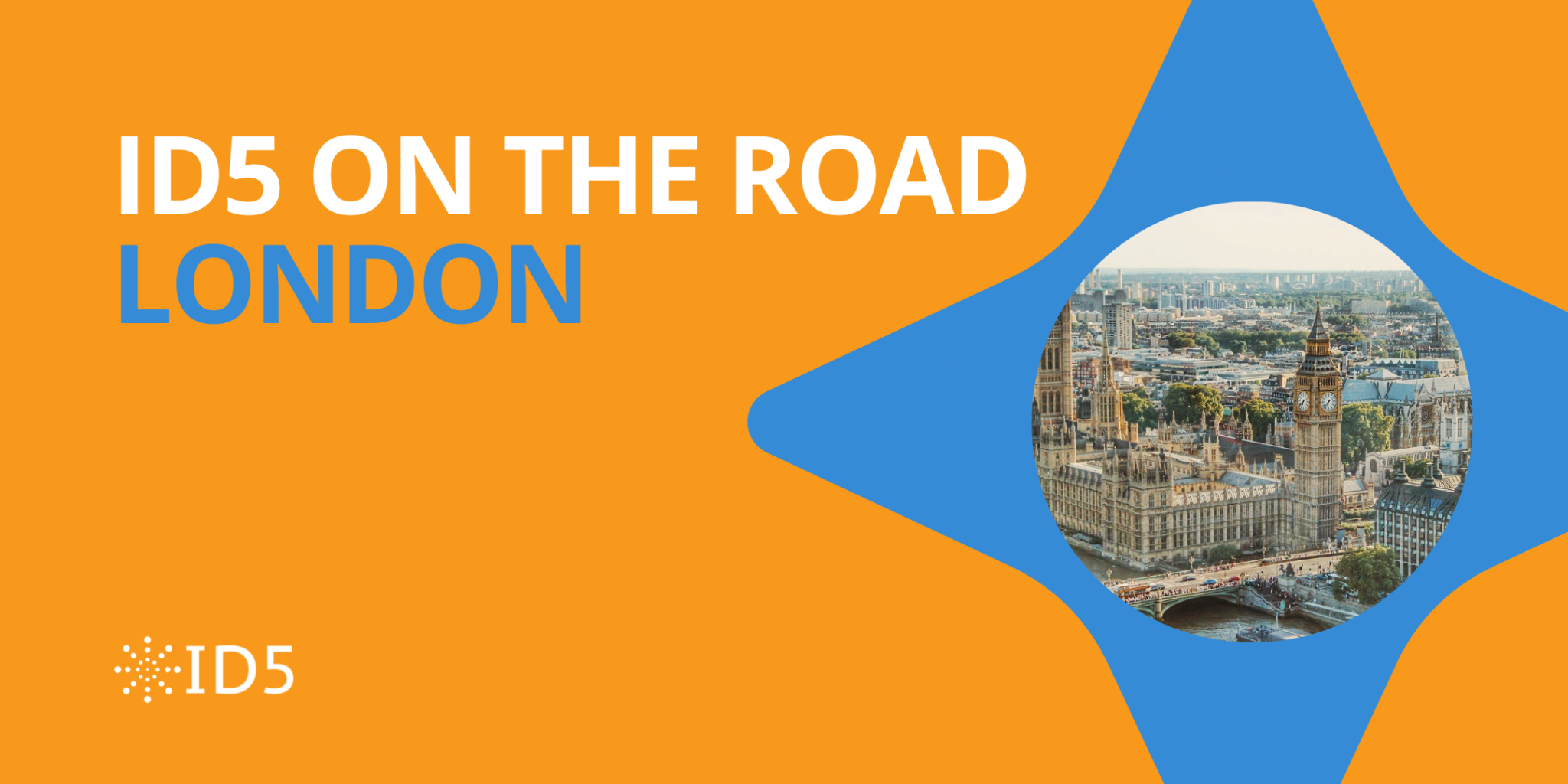 Landing in London for the first time in almost three years, ID5 on the Road London took place on October 11, 2022 and was a great success. Inviting experts from across the industry to join us on stage, we saw buy-side discussions, sell-side perspectives, omnichannel deep dives, data protection discussions and more.

If you weren’t able to make it to the event, or if you’re looking for a recap of the sessions, keep on reading to learn about some of the best bits from the day.

ID5 on the Road London, Session One: Moving on from cookie-based advertising: an exclusive preview of Sincera’s analysis of 65,000+ websites

The study looks at:

For this session, the panelists delve into a discussion around the current state of the supply-side, looking at the extent to which we are capitalizing on the cookieless present, alignment between the sell and buy-side, and more. Speakers: David Pironon, EVP Global Platforms & Data Partnerships at Equativ, Tom Pickworth, Head of Technical Operations, Commercial at Mail Metro Media, Narendra Kumar Chandrapati, Director – Customer Success Operations, EMEA at PubMatic, Faisal Karmali, Senior Director, International Business Operations at WarnerBros Discovery and Morwenna Beales, VP, Strategic Accounts at ID5 (moderator).

Some felt that the dialogue must move away from a ‘future’ without cookies to instead focus on the present day. That we are already swimming in inventory pools that have been blocking third-party cookies for many years.

PubMatic’s Narendra Kumar Chandrapati made the point that publishers whose advertising strategies relied heavily on third-party cookies are already feeling the negative effects. Yet, those who are making progress on their cookieless futures and negotiating based on business outcomes, rather than traditional reach and awareness metrics, can ensure media dollars are working harder than ever before.

It was suggested that publishers must make it straightforward for brands to work with them. When publishers have ready access to different IDs, brands can work with publishers with less development time. Additionally, publishers should ensure that their addressability technology enables not only interoperability but also experimentation, so they can test and learn alongside the market around which addressability signals work best for their business.

With the number of positive tests appearing over the past year, it is clear that testing is a key aspect of successfully landing the jump from cookie-based to cookieless. A recent test of the ID5 ID, which was conducted by Prisma, Adot, and Equativ, confirms the effectiveness of the ID in maximizing the value of publisher inventory in cookieless environments. The running of the campaign through ID5 on Safari and Firefox environments generated an additional audience equivalent to +23 points of coverage.

ID5 on the Road London, Session Three: Getting cookieless ready: thoughts and success stories from the buy-side

For this session, the buy side takes to the stage to discuss authenticated vs unauthenticated audiences, the next big step the buy side should take, and more. Speakers: Georgina Bankier, Global Strategic Partnerships at Eyeota, Chris Keenan, VP, Business Development EMEA at MediaMath, Amelia Waddington, SVP of Product, Captify, Morys Ireland, Head of Data & Technology Services, Mindshare and Joanna Burton, Chief Strategy Officer at ID5 (moderator).

Third-party cookies have been around for a long time, so moving an entire industry away from its reliance on them is no small task. Companies have had to implement significant changes to rewire their business for a world without third-party cookies, and have been focussing on leveraging first-party IDs in order to test and ensure they continue to provide the same level of service to their clients.

Relying on first-party data is not enough

It was called to attention that it is unrealistic to rely on first-party data alone – most advertisers do not have enough of it. Instead, other solutions, such as universal identifiers, must be implemented into their identity strategies to ensure a future-proofed transition into this next chapter.

Recent tests, such as the recent one conducted by MediaMath and ID5, prove the value of The ID5 ID for advertisers. IBM was able to create a retargeting segment of 1.4 million unique users and maximize its campaign budget with the average CPM being up to 21% lower across Apple iOS.

Measurement will be the future focus for the buy-side

It was noted that a lot of tests have been conducted over the past year, with the majority being significantly activation centred. Eyeota’s Georgina Bankier believes that the next big focus for the year ahead is on measurement.

For this session, the speakers discussed all things omnichannel, from moving away from a siloed strategy to the benefits of an omnichannel approach, and more. Speakers: Piper Heitzler, Head of Growth, EMEA at Amobee, Simon Rochlitz, Customer Success Director at Semasio, and Davide Rosamilia, Director of Product Management at ID5 (moderator).

Amobee’s Piper Heitzler noted that enormous event in the world of identity in Europe was the deprecation of Tapad’s cross-device graph back in June 2021 – giving a 30-day notice to take the graph away from our platforms. After that, not only did we need an identity graph for today’s world, but we also needed something that was future-proofed and scaled across the fragmented ecosystem in Europe.

From siloed to omnichannel

Another viewpoint was that over the past few years, many companies that are moving into programmatic have shifted their mindset from performance to value, which is a combination of price plus performance. This is what identity helps to provide: a basis of multi-domain cross-channel open internet tracking, frequency capping, and measurement. This gives these companies an idea of where programmatic adds value to their media plan so they can allocate budgets and share them accordingly.

The proof is in the pudding

ID5, in partnership with Amobee, enabled boutique wine brand Gusbourne to expand its reach by 76% and achieve a conversion rate of 95% while reducing CPA by 23% for a recent direct-response, cross-device display campaign.

The pendulum is swinging toward the publisher

Finally, Heitzler also made it clear that they want to move into a world where publishers define the audiences themselves. Ten years ago, the eye of the DSP was much wider than the publishers’. DSPs have been able to see across every single domain and every single publisher and reaped a lot of the benefits. The pendulum is now swinging towards the publisher – where it should be. The publisher should be able to monetize, access, and see exactly how their data and traffic are transacting.

For this session, the discussion turns to how the digital advertising industry can clean up its reputation, the evolution of the TCF, and more. Speakers: Elena Turtureanu, Senior Compliance Director, Legal & Privacy at Adform, Townsend Feehan, CEO at IAB Europe, and Mathieu Roche, CEO and Co-founder at ID5 (moderator).

What is to blame for the negative outlook on the digital advertising industry?

Much like the industry itself, reputational issues are complex and interconnected. However, factors that influence the negative perception of the industry amongst EU policymakers include:

IAB Europe’s Townsend Feehan suggested that dialogue and standardization can help address the legitimate grievances that industry and outside stakeholders have with each other. This includes standardizing transparency, accountability, ROI, and brand safety for advertisers as well as appropriately educating consumers on the value exchange. If we do not work this out together, there is a significant chance that we will see more regulation come into place and lose the information-and-choice paradigm.

Advertising is the business model that supports access to content and services for free based on the information and choice paradigm. To better fit this paradigm, Adform’s Elena Turtureanu suggested that the evolution of the TCF, and privacy, in general, may be largely influenced by the publisher and vendor side. Publisher compliance checks of the vendors are essential in achieving better transparency and control.

Back to Latest News